of the Fox Covert

The Fox Covert had rather humble beginnings from around 1966 where a couple Mr and Mrs Young used to run it. The Young’s did cattle transporting for the local farmers and also ran the Half Moon. The Half Moon was the precursor to the present name that the pub took on from it’s new owners.

In the words of Brian who has been in when he was about 11 years in 1966 ‘A bar was non-existent and when you walked in the pub it resembled more of a living room’. A woman, Mrs Young used to come around from an interior room that adjoined the main hall serving the clientele, who were mainly farmers from around the area, drinks.

Then there was a brief spell where the Half Moon was left empty. And then it went up for sale.

A chap named Herbert Wood who ran the New Inn down the road from the Half Moon bought it in the late 60’s. He then set about changing the place.

A long bar was added as part of the modernisation. And the horse stable and pig sty that was at the end of the property was developed into a restaurant.

It was sometime in 1968 that The Half Moon was re-christened as The Fox Covert. It was also around this time that the Kirklevington Country Club came along which hosted acts like Rod Stewart and Long John Baldwry. 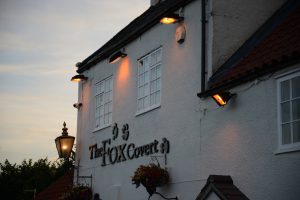 Chris who was then the area manager for Vaux Breweries, bought the pub along with this wife Sue and ran it till early 2018.  They made extensive renovations and moved the bar to the central and knocked off all the partitions to make it one long open spaced pub.

Nicola and Jane who have both worked for at the Fox Covert since their teens eventually took over after Chris and Sue. They are both passionate and excited to offer existing and new customers an excellence in service that they’ve come to be accustomed to. Joanne and Jimmy, the managers, like other staff have had a long term association with the Fox Covert.

Set on the fringes of the sprawling housing estate of Ingleby Barwick, The Fox Covert warmly extends its welcome to everyone to come and enjoy the hospitality that we offer.

This website uses cookies to improve your experience while you navigate through the website. Out of these, the cookies that are categorized as necessary are stored on your browser as they are essential for the working of basic functionalities of the website. We also use third-party cookies that help us analyze and understand how you use this website. These cookies will be stored in your browser only with your consent. You also have the option to opt-out of these cookies. But opting out of some of these cookies may affect your browsing experience.
Necessary Always Enabled
Necessary cookies are absolutely essential for the website to function properly. This category only includes cookies that ensures basic functionalities and security features of the website. These cookies do not store any personal information.
Non-necessary
Any cookies that may not be particularly necessary for the website to function and is used specifically to collect user personal data via analytics, ads, other embedded contents are termed as non-necessary cookies. It is mandatory to procure user consent prior to running these cookies on your website.
SAVE & ACCEPT